Commonly confused words: go to whoa and woe to go 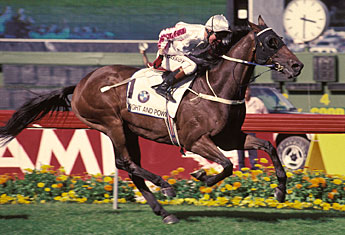 Might and Power, who led from go to whoa in the 1997 Melbourne Cup

From go to whoa is an old expression. Whoa is a word that is used by people who work with horses, where it is used to tell a horse to stop. Strangely, the word had two pronunciations:  woo (rhymes with boo) and woe (rhymes with toe). Horses seem to cope with this just fine, even when the person with them uses both pronunciations almost interchangeably. In the expression go to whoa, whoa is pronounced to rhyme with go. Go to whoa means from start to finish. It is still commonly used in horseracing to describe a horse who literally leads the race from go (the start) to whoa (the finish, when the horses are pulled up to stop).

Sadly, fewer and fewer people these days are involved with horses or racing these days, and they simply have never come across whoa, or even know how to pronounce it (I have heard people say ‘Wo-ar’). And when they hear go to whoa, they understand it as meaning go to woe – which really doesn’t make much sense. What happens then is even stranger: people who don’t understand the meaning of go to whoa are turning the phrase around and using it as woe to go. This still doesn’t make a lot of sense, but people seem to want it to mean to solve a difficult problem so that something can start. (To me this seems to be putting the cart before the horse: if you’re solving a problem, you’ve already started whatever it is you are doing.)

If you run an internet search for woe to go, you’ll find something like 31,800,000 results. That’s a lot of uses, but it doesn’t mean that all those 31,800,000 people are using a meaningful or correct phrase. Some people might argue that this change in the phrase and the way people use it is simply the evolution of language; I prefer the explanation given by the Macquarie Dictionary: that is is an ‘eggcorn’ or amusing mishearing or misunderstanding (it what could be another misunderstanding, the Macquarie Dictionary’s article about this phrase doesn’t mention that the phrase is commonly turned around). Happily, those using go to whoa correctly outnumber those who are confused about the phrase about three to one:  you’ll find more than 90,000,000 people still know what this phrase means and how to use it.

Okay, I’ve trifectaed the Cup two years running (you can check my 2018 Cup Eve post on the difference between reins and reigns, and my 2019 Cup Eve Facebook post for proof!), so that suggests you should probably back anything but these horses. For what they are worth, here are my thoughts for this year.

4  Master of Reality  – this horse very nearly upset my plans last year, and I’m giving him the respect he deserves this year, even if the firmer track is maybe not so good for him.

6 Twilight Payment – I liked him last year when the soft track didn’t suit him; I think this is his year.

12 Prince of Arran – I have a huge soft spot for this old horse. He may be too old, but has a great draw and the best jockey in the country this time.

13  Surprise Baby – Go the baby!  (Yeah, it doesn’t take a great deal of skill to pick one of the favourites — but I also picked him last year!)

15  Russian Camelot – I usually don’t like horses that haven’t run the Cup distance, but maybe, just maybe, he can do it.

24 Persan  – again, he has never run the distance, I don’t think he’s bred for it, he has an awful barrier – but horses don’t read stats and since this horse won his maiden race in May, he’s never finished further back than second, and he just keeps meeting every challenge. This could be where he is outclassed  — or where a fairytale has the ultimate happy ending.

They are my  top six picks – and I might add one or two more.  I’m having trouble deciding between 7 Verry Elleegant and 11 Finche. I might add both, or neither. Common sense says I really should put in no. 1 Anthony Van Dyck or no. 21 Tiger Moth (the equal favourites as I write this) but I just don’t think either will win; I might end up with Anthony Van Dyck  . . . (A 7-horse box trifecta will cost you $21 for 10% of the dividend; an 8-horse trifecta will be $17 for 5% of the dividend.)

And then . . . 22 Oceanex – there’s really no reason to pick her – although she does run well at Flemington – I just like her!  At 70/1, I might just have a couple of dollars each way. She might well be outclassed here but you just never know. In the interests of full disclosure, I did put some money on no. 5 Sir Dragonet to win the Cup after he saluted for me in the Cox Plate, but now I’ve had some time to look at the form in more detail, and I really wish I’d kept my money for another pick.

Proving that anything is possible in 2020, Twilight Payment not only won the Cup, he led from go to whoa . . .

Photos: Might and Power reproduced by kind permission of and © Quentin J. Lang Photography